Distance: 2 miles round trip from the gate (can be up to 4, depending on where you park)
Elevation gain: 400 feet
Date: July 20, 2015
Bathrooms: Outhouse by the haystacks (not sure if it’s meant for the public) 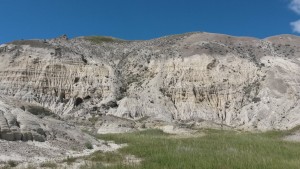 GoogleMaps recognizes North Dakota’s highpoint and will accurately deposit you at the donation mailbox. We saw a sign on the way in that seemed to direct highpointers down an unnamed dirt road. While it appears to drop you at the same spot, the quality of that approach seems questionable, so be safer and go with GoogleMaps.

The donation mailbox is easily identifiable with its orange spray-painted letters shouting “donation,” but does not specify an amount. I’d read the original owners demanded $20/car and would find you to chat in person to make sure you did. After those owners passed away, I’d read on summitpost and in the Highpointers newsletter that the new owners only request $10/car. With no guidance on the mailbox, you can probably get away with donating any amount. All I can say is that no one was manning the donation box the day we were there and the house may be vacant. Still good karma to contribute to this highpoint to make sure it stays open for hikers.

The turn after the donation box was barely passable in an SUV. A sedan likely would not have been able to navigate over the waist high grass and around craters the size of children’s swimming pools. After heavy rain, this road is probably not drivable, but room exists for a few cars to park near the donation box should this road be undrivable. 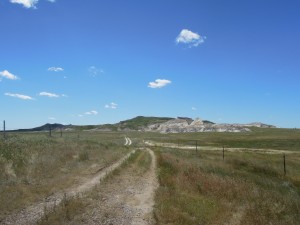 If you can proceed down the road, it will save you about 2 miles round trip and you’ll find plenty of open places to park. An outhouse stands about half a mile from the gate, cloaked between giant hay bales. Not sure if it’s meant for the public, but it’s there and it’s unlocked.

At the gate, the fun begins. The trail is easy to follow, but does not seem maintained. Sections of it are marked with waist high grass, so wearing pants is advisable. With the threat of rattlesnakes on this highpoint – many hikers have reported them and the land seems ripe for them – walking through these patches definitely gets the heart going. One of our Twitter connections told me he wore rattlesnake guards for this hike. I thought of him while I was stepping my way through some sketchy patches and probably should have followed suit. Fortunately, we have no rattlesnake encounters to speak of.

Add to the tall rattlesnake grass is a harsh, punishing sun with no cover. Sunscreen and water are key to staying lucid.

400 feet of elevation gain with 2 miles round trip sounds like a stroll around the neighborhood. It’s not. Especially not with a 5 year old. This hike was much harder than the 7 miles on Harney with a child in tow.

The terrain varied considerably across the one mile to the summit. In places it was steep with loose scree. Several times, my husband had to pick up my daughter because it was just too much for her. He, also at my request, opted to carry her through the patches of rattlesnake grass. The extra weight and bulk of a traveling companion made the terrain unenjoyable for him, which I gathered from his incessant mutterings about how this was his least favorite highpoint. Ever. He felt so strongly against White Butte that he asked if he could write his own piece to give readers the “real” version. Keep reading, I give him the floor at the end. 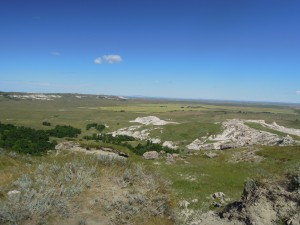 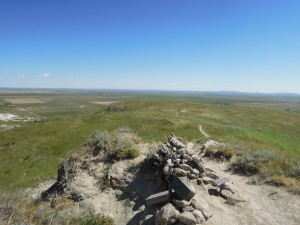 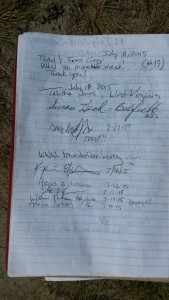 The register was the real highlight for me. One week before our hike, Michael J. Fox had climbed White Butte for charity.  This climb was in support of MJFF staff member, Sam Fox, who is biking across the country and climbing the highest point in every state with the goal of raising $1 million for Parkinson’s research.  Please consider donating to his cause: tourdefox.org). When we reached the summit, rather than me taking in the views or signing the register myself – or even allowing my daughter to sign the register, which she politely asked to do half a dozen times while it was in my hands; I was too entranced to muster an answer – I flipped back one week to see if Michael J. Fox had signed the register. HE HAD! Apparently, dozens of hornets swarmed the summit. I was oblivious to it. Michael J. Fox’s autograph in a summit register – what a fantastic highpoint! After taking several pictures of his entry (for the record, he thought it was “great!”), I turned the register over to my daughter who was delighted to sign her name. She posed for a few pictures with me, then asked to get away from the hornets. What hornets? My husband and daughter began descending while I continued to hold onto the register, giddy from the MJF vibes, and still blissfully unaware of the angry stinging pests surrounding me.

As I returned the register to the ammo box, I noticed a coffin-like box next to it. Inside was a second, handmade register. I signed both for good measure, but this one was a quick chicken-scratch kind of signing since my two hiking companions were already descending.

Now, for my husband’s take on White Butte:

As readers of this site know, I do not write reviews and I gleefully tag along on Raina’s climbs getting her from point A to point B.  Yes, I’ve summited 28 highpoints myself at the writing of this, but it is not my goal or dream to get all 50.  I go to support her and to see what each state highpoint has to offer.  It’s not about the climb or the number for me.  It’s about the overall experience of the adventure.  Because of this, I need to weigh in on North Dakota because I feel that Raina’s view is biased by the mere fact that Michael J. Fox was there a week before us and had made the ground we walked on sacred by sprinkling MJF sweat in the dirt or something.

From my point of view, the highpoint was surprisingly long for being a Bluff on some dude’s farm.  You drive forever, through nothing, risk your suspension driving through a farm field only to then bake in the sun while “climbing” through waist high grass and shrubs to reach a dirt mound with swarming flies and wasps.  Yes, you could see for miles and yes apparently it is a place for celebrity spotting, but a must do for the experience, it is not.

If you’re heading in or out of Bismarck on this highpointing adventure, be sure to stop for coffee at Bone Shaker.  Staff is friendly, coffee is delicious, and the options are so vast it will make your head spin. With flavors like pumpkin pie, gingerbread, peanut butter, and raspberry, you will leave caffeinated and satisfied by your unique creation.

Beer lovers, carve out some time for Laughing Sun Brewing Company.  Sample everything on tap from Sinister Pear to Black Shox Porter; they will have something that appeals to your pallet. Even better is making a dinner of it from the pizza place next door.

About half an hour outside of Bismarck is the World’s Largest Cow, Salem Sue. For a $1 donation per car, you get to see this marvel for yourself. A great stop to break up the driving. Plus, you can explore some light hiking trails to get nice views of the surrounding areas.