To say that I hiked Mt. Rogers with my husband would be like saying I hiked it with anyone who was there that same day.  Sure, we covered the same ground on the same day and maybe exchanged a head nod in passing, like I would with strangers.  But, with him constantly 75 yards ahead of me, I can hardly call it hiking together.  When he read my draft write-up, seeing the hike through my eyes for the first time, he clarified that he didn’t intend to leave me in the dust; he just wanted to prove that his slow pace on Mt. Whitney was solely due to altitude and that he is the “picture of physical fitness.”  He resolved that hiking 9 miles at a runner’s pace on Mt. Rogers would be the appropriate redemption.  As long as he stays in earshot when holding my lunch hostage, I’m fine with some time of solo hiking. 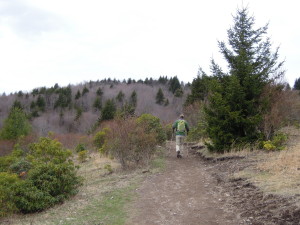 My interest in Mt. Rogers pre-dates my highpointing addiction.  The day after I summited Mt. Elbert in 2012, before I realized I was into this hobby, I met a couple on Pike’s Peak who had climbed Elbert a few years back.  Learning that I was from Virginia, the wife asked if I’d climbed its highest point.  At that time, I was so unfamiliar with state highpoints that I had to ask what mountain that was and where it was located.  She spoke of rhododendrons and wild ponies roaming the trail.  This sounded mystical and surreal.  I had to experience it for myself, so I mentally added Rogers to my list of must-do hikes.  This was, after all, my home state; a necessary accomplishment. 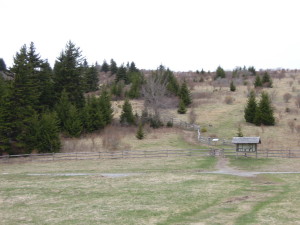 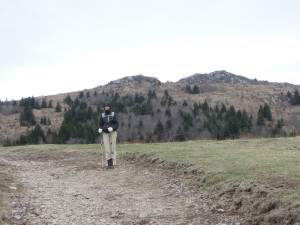 It took two years, but I was finally able to carve out time for the 6+ hour trek to southern VA.  We were about a month too early to see any of the promised rhododendrons in bloom, which disappointed me.  Add to that, the ponies were nowhere to be found for most of the ascent.  I was getting worried that the ponies would join the ranks of the non-existent rhododendrons, but was delighted to spot one near the summit!

Most of the terrain on Rogers is rocky and requires you to pay attention to where you’re stepping.  Along the way, I had fun passing through a cave with ice covering the floor – another place to watch your step, but fun all the same.  In several places, other trails intersect, so it also requires some level of attention.  Nearing the summit, is what I can only describe as a Tolkien-esque forest.  It envelops you in a quiet, fantasy kind of way that immediately conjures up images of The Hobbit/Lord of the Rings. 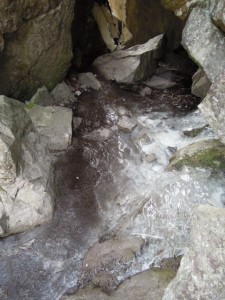 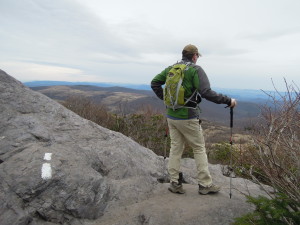 The highpoint, itself, is currently marked with a cairn.  A USGS marker sits to the side of it.  No register or bench.

We chatted with a military guy from Alaska at the summit who intended to meet a few friends.  He had no idea where they were coming from or what time they would be there.  The well-laid plan was simply to meet at the summit on that particular day.  Hope he connected with his buddies.  That could have been a long day for him.

On the way down, I followed a sign down a path marked “Privy.”  Mt. Rogers wins the award for the very best outhouse I have ever used.  It’s airy so the usual offensive odor isn’t an issue.  And, it’s private.  This beats peeing in the woods (for a woman at least) and still made the bathroom stop feel rustic and authentic for hiking.  This was even better than the flushing toilets at Florida’s HP.  Thank you, Mt. Rogers, for offering such a fun and interesting bathroom break. 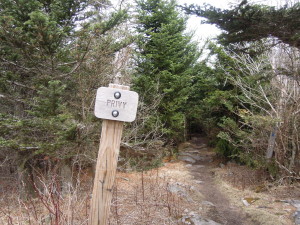 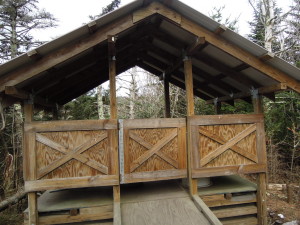 My worry of not seeing ponies really became a non-issue on the way down.  Continuing our descent, we encountered two separate herds of 8-9 ponies.  One pony was so bold as to try to eat my sandwich, but I was not about to part with it.  Sorry, pony. 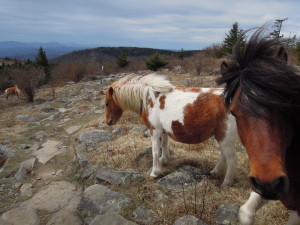 Brown pony with black hair is the attempted sandwich thief. 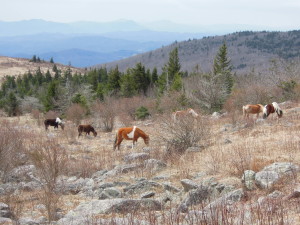 I enjoyed Mt. Rogers for the unique experience of sharing the trail with wild ponies, the cave of ice, the Tolkien forest, my favorite hiking privy, and mileage that made me feel I worked for the summit without requiring every ounce of my being.  I’d love to return when the rhododendrons are in bloom.  I may see Mt. Rogers again, but likely after I’ve made all of the other highpoints.

The ice cave is not so icy in August!

We did Mt. Rodgers as a family hike this summer with our kids (ages 6 and 9.) The wild ponies and the small rock scrambles on the Wilburn Ridge made this a popular one with the kids, although this was probably at the limits of what they can hike at this age. If you hike this one during the summer remember that there is almost no shade along the trail, so bring your sunblock! We lucked out with an amazingly clear and cool day. We were all really jealous of the people camped in the balds near the shelter, and vowed to do this as a family backpacking trip one day. 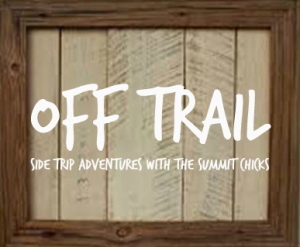 We enjoyed the Natural Bridge Zoo on our way home. They let you feed the animals and ride an elephant!